The Efficacy and Neurobehavioural Mechanism of Cannabidiol (CBD) for Alcohol Dependence

Currently taking place is a new clinical trial designed to test the effectiveness of CBD on alcohol misuse & sleep – with an estimated study completion date of June 2024, participants will be given 3 doses of 800mg CBD, or 4 200mg gel capsules of pure CBD, and measured to see differences in alcohol consumption, heart rate, brain activation and cravings, among other observations. This trial is currently in phase 2, with 20 participants.

Epidiolex® for Anxiety in Pediatric Epilepsy

With results predicted in April 2026, this trial is looking at whether Epidiolex, an FDA approved drug containing CBD used for the treatment of epilepsy, can be used in children and adolescents to help additionally treat anxiety. A phase 4 trial with 20 participants, it consists of giving participants 100mg CBD (Epidiolex) for 16 weeks and measuring anxiety levels to see whether the drug could have the additional benefit of anti-anxiety medication.

Effects of Cannabidiol (CBD) on the Activation of Autophagy and Inflammation Genes, Functional Consequences in Virologically Controlled HIV-infected Patients (GALIG-CBD)

Estimated to conclude in December 2022, this promising trial looks at the effects of CBD on HIV. Patients will receive a dose of 1mg/kg CBD oil twice a day for 12 weeks, and the study will measure mRNAs in participants to conclude whether or not the CBD is having an effect on HIV. With 80 participants in this phase 2 trial, we’re excited to see the conclusion of this, particularly as it’s coming up so soon!

Reducing Pain and Opioid Use With CBD

With 150 participants, this large-scale clinical trial looks at full spectrum CBD vs broad spectrum CBD in their effectiveness in reducing opioid use, anxiety and pain, and improving sleep and cognitive function. Participants will receive 210mg a day for 12 weeks of either full spectrum CBD, broad spectrum CBD, or hemp-seed oil with no CBD, and then be observed on changes in opioid use, sleep & fatigue, anxiety, and pain, among other studies. Estimated to complete in February 2027, this phase 2 trial is another step towards discovering CBD’s full potential, particularly in addition therapies.

If you are interested, you can find countless more up-and-coming CBD-related clinical trials here! 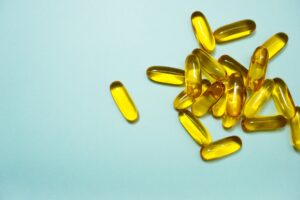 Bioavailability for CBD: Are Oils or Edibles Better?

What is bioavailability? In order to have an effect, CBD needs to reach your endocannabinoid [...]

What is the Endocannabinoid System?

The endocannabinoid system (also known as the ECS) is a complex cell signalling system in [...] Since we opened our new CBD store in Leeds in January, I have seen a [...]

CBD for Menopause: Can CBD Help with Menopause?

CBD for Menopause This week in Canada, it’s been reported that women are increasingly turning [...]

What’s Happening in the World of CBD?

The FDA has released an article on its recent research and commitments to CBD, and that it acknowledges the additional work needed to build data on CBD in order to FDA approve more products for medical purposes. They “believe that ongoing efforts to systematically collect data on…CBD are important” and “are engaging with stakeholders to advance this work” – good news for CBD producers and users alike!

As CBD becomes more and more well-known, charity Hemp Aid are working with humanitarian workers to transport CBD into Afghanistan to help tackle the opium industry, as well as the food shortage crisis – in fact, hemp fibre can be used to make bread seven or eight times more nutritious, with no taste drawbacks! Hemp Aid wants to use CBD to tackle Afghanistan’s growing opium industry, which currently supplies the majority of the world’s heroin.

CBD is often mainly marketed as a pain reliever, and in 2021, another study was conducted on these believed properties, by Martin de Vita, Stephen Maisto, and Dezarie Moskal. Inducing experimental heat pain, the trio administered a mixture of CBD and placebos (including telling some participants they were receiving CBD when they actually were given a placebo, and vice versa), and found that generally a combination of the pharmacological and psychological effects of CBD gave improvements in pain. Curiously, they found that, rather than just reducing pain intensity, CBD helped reduce the way pain felt in participants, meaning they were less bothered by it and could go about their daily lives as they would choose to. The trio used pure CBD isolate oil in their study, not unlike those that we produce and sell here at Hemp Well – it’s good to know that CBD pain relief is a universal experience!

A recently published study has shown there is significant evidence that CBD may be able to help prevent COVID-19. A significant negative association with positive COVID tests and those taking Epidiolex, the FDA-approved CBD drug for treating epilepsy, has been noticed, and researchers are now keen to carry out clinical trials to determine if CBD could be used as a prevention/early treatment for COVID-19. Initially testing CBD due to its anti-inflammatory properties, it has been found to directly inhibit COVID spread in three types of cells, and for four variants of COVID-19. And now real world data is showing that patients taking CBD are less likely to test positive for COVID – we’re looking forward to seeing more evidence unfold!

A recent observational study examining pain, anxiety, depression symptoms, and wellbeing in 279 participants over the age of 18 showed that CBD treatment can have a positive impact on mental health for people with moderate to severe symptoms. In addition to this, adding THC to the CBD did not seem to have any effect – another piece of evidence that CBD is a viable alternative to cannabis.

This 2022 article covers 24 benefits of CBD, which have been researched/studied to some extent. Some examples of these are epilepsy, inflammation, cancer, addiction, arthritis, mental health disorders, and numerous more. A great place to look for your particular need and find a study to support safe CBD use for your condition! 5. What dosage should I take? Are you 18 or older? This website requires you to be 18 years of age or older. Please verify your age to view the content, or click "Exit" to leave.
View Cart Checkout Continue Shopping